Abandoned by his first love and betrayed by his pack, Josh has sworn off packs and is content to raise his son alone. The last thing he was expecting was for an injured alpha to knock on his door. Against his better judgment, he gives them a place to stay. It’s meant to be temporary, but as he grows closer to a certain kind and alluring alpha, he starts to question his solitary life and what is really best for his son.

The plan was simple; travel from pack to pack, find a mate, and start his life. A faulty bridge and a broken foot put that plan on hold. Brighton is reluctant to burden the mysterious omega living in the forest, but under the omega’s care and charm, he wonders if he found the future he desperately wants after all.

But someone is watching them. Someone who Josh never thought he’d see again. Will Brighton and Josh admit their feelings for each other? Will they unite in time to stop this threat?

Hugo has always despised his omega status. He hates his heat and he hates the attention he draws from the alphas around him. He wants nothing more than to feel in control, even if it means taking an experimental and possibly dangerous “heat blocker”. But when he gets sick, his sullen alpha roommate takes a sudden and annoying interest in his welfare. An interest that starts to make Hugo begin to believe that being an omega isn’t such a bad thing after all. That maybe a mate might make him happier than he’s ever been

After his beloved little brother found his mate, Cory is left feeling restless and drifting. He’s spent his whole life taking care of someone and he doesn’t know how to do anything else. So when a certain aloof omega falls ill, he just can’t stay away. As Hugo’s walls start to crack, Cory finds that there’s more to the omega than he and the pack first thought.

The final story in the Summerwood Wolves Series! 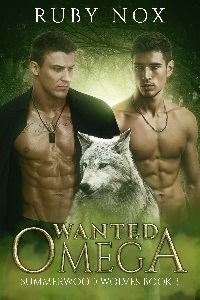 Avery had never had a home before, unless he counted the northern wilds. Always moving from one place to the next, the idea of a permanent home was foreign and almost unwelcome. So when his brother settles them down with the Summerwood Pack, he finds the adjustment almost unbearable. At least he would if it weren’t for a certain dark and alluring alpha. Although Jarrett is reluctant to let him in, Avery’s determined to give him what they both need.

After the death of their father, Jack and JJ have their mates and children to get them through the heartache. Jarrett…doesn’t. Lonely and heartbroken, the once carefree alpha struggles with each new day, yet at the same time, he’s determined to hide his emotions and deal with his loss alone. At least he would, if a certain socially awkward and endearing omega would stop following him around. But the more Avery pushes his way into Jarrett’s life, the harder it becomes for Jarrett to keep up his carefully crafted walls.

But just as love blooms and hearts start to heal, a new threat arrives at the gates. A decade long search comes to an end.